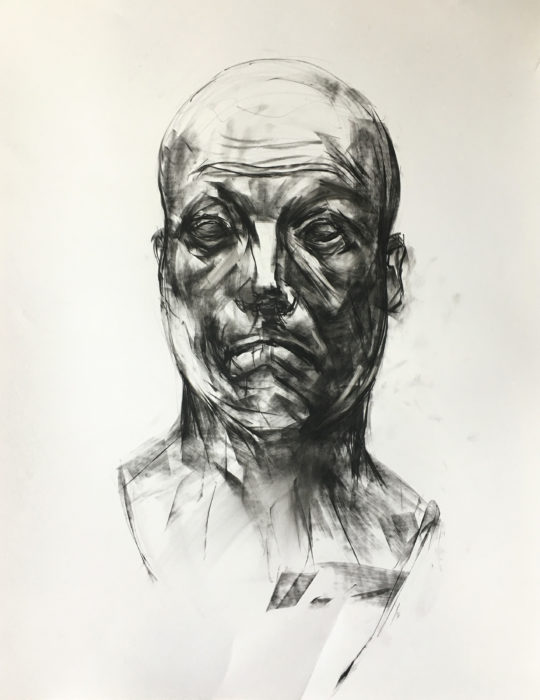 Franz Xaver Messerschmidt was an 18th century Viennese sculptor. For the first part of his career he was a well-regarded court artist with royal commissions, on the path to procuring the sculpture chair at the Royal Academy of the Arts. By the end of his life he was a paranoid eccentric in Pressburg obsessed with completing his “Köpf-Stückhe”, a painstakingly created set of heads with expressions unlike any seen in the world at that time.
Messerschmidt’s work has influenced generations of artists From Egon Schiele to Tony Cragg. And had he been born just a few decades later- plucked from the waning years of the ornate Baroque period and dropped into the frenzied explosion of ideas in the Enlightenment- he might have had a very different life and legacy.

This series of drawings and set of three original prose pieces are based on what little we know about the working methods, theories and influences of this interesting and powerful artist.

Messerschmidt takes time from his work to look through his window at the setting sun over the Danube. Night is coming to his little room, and the spirits will be back to torment him. There are still holes in his armor that need chasing and plugging. He has heads yet to finish before he can hope to lock them all out.

He rouses from his thoughts and returns to his work by pinching himself hard below the ribs on the right side. He is bruised there- purple and black like bronze- so his face tightens and contorts and he steals a glimpse in the mirror beside him. The mouth of the piece must be flatter and pinched tight. The edges more contorted- pushed farther down into a grimace. He tries to memorize the sweeping bright crows feet near his eyes.

As he lifts his hands to the head, he steals a glance at the drawing of Hermes hanging by the window and is refilled with peace at the perfection of it. The monsters will torture him tonight. And the worst of them all, the terrifying Spirit of Proportion will caper from the shadows in his room and peck at him with his bird-like pursed lips and laugh. The spirits know that there must be balance to the laws of nature, and Messerschmidt has found ancient secrets and symmetries. He knows more than he should, and they will have revenge for his work.

He pinches himself again hard under his ribs and almost cries out but keeps control enough to quickly study his reflection. He knows that he is doing everything he can to survive.

One of the spirits tonight told Messerschmidt of the future.

While the monstrous angel was bent over his bed like a canopy, scraping broken glass across his back, it told him about the futility of his sculptures. In a bullfrog’s voice, the spirit croaked that within two years of Messerschmidt’s death all his work will be sold for a pittance. That a hospital cook will buy his heads for a week’s wage- all of his talismans will be sold for rotten bread and displayed for mad children with fevers. His work will become a farce. A stranger will name them with blasphemous titles like “Afflicted with Constipation” and “Overcome by Flatulence.” A sculpture with the mouth open in a perfectly silent scream will be neutered and called ”The Yawner.” His own likeness, with bowed head in prayer, will be called ”A Hypocrite and A Slanderer.” He will be considered an oddity- a foolish old crackpot- and at the Vienna carnival, couples in love will shoot arrows at plaster copies of his divine postures for fun.

While the spirit pressed hot pins into the flesh of Messerschmidt’s feet he whispered that all which will remain of his life’s work will be his polite portraits of disgraced and unfavored royalty and his gentle, shallow cameos of the ruling class. He will be remembered as a soft-bellied barnacle of the aristocracy. Not a martyr who unearthed the secret knowledge for which he pays so dearly each night.

As the flesh on his feet smoked and bled- as boils ballooned and were popped- the spirit spit on him. Messerschmidt made the pursed and strained expression of a head he hadn’t carved yet and the spirit cracked like alabaster and disappeared in a bright spark and smell of hot oil.Messerschmidt cried out- sobbed into his straw bed and was scared to return to sleep- not knowing which side of the horizon he was on.

3: HOW TO CARVE ROPE

Messerschmidt is carving the twisting braid of rope crowning the head, but he is thinking of his friend Mesmer and his knowledge of the invisible fluid that rules us all. How it is affected or blocked by trauma to the body and mind, but has been mastered by Mesmer’s science and reason. The temperamental fluid can be smoothed and calmed with the aid of his miraculous magnetic machinery.

He is thinking of the nights in Mesmer’s garden; the rope around his head and waist, or the clamp on his leg and the metal bar in his mouth, and the Baquet– the wood machine with arms like a great fat spider, connecting them all together in Animal Magnetism.

He is carving the braid of rope, rolling his hands over the knot at the forehead like the curves of a churning wave, and he is thinking of cannons. It’s nothing short of fate, when he thinks of his time in the Imperial arms foundries. That carving the designs of curling rope which embellish the cannonades has brought him here. Pulled him like a magnet to this moment. This humble little room and now the rope again, under his fingers.

He is carving the rope but thinking of how lucky he is to live in an age of transition in reason. He’s learned great things through his study of Ancient Egypt, from his studies of Hermes Trismegustus. And he’s also learned from the masters of his age. From Lavater’s Physiognomy he has learned that we wear ourselves in our faces; our minds might be read in the lines of our expressions and grimaces. And he’s found the way that the truth is all tied- from the masters of Egypt to now- and through to the future. And he is punished for it every night.

In the pursuit of perfection, it is worthy to attain the state of noble creatures, and creatures don’t show the pink of their lips to each other. So some of his heads will have tightly shut mouths and some will have no lips at all, just a blank bar of metal, as he saw it in his friend Mesmer’s garden.

Creativity Diagram Comics
Back To Top